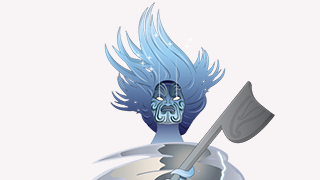 symbolic of the wind and storms

Tāwhirimātea controls the weather, including thunder and lightning, wind, clouds and storms. He didn’t approve of the separating of his parents and in his anger at his brothers, Tāwhirimātea destroyed the forests of Tāne (god of forests), drove Tangaroa (god of the sea) and his progeny into the sea, pursued Rongo and Haumia-tiketike till they had to take refuge in the bosom of their mother Papa, and only found in Tūmatauenga a worthy opponent and eternal enemy.

He is holding a tewhatewha, his weapon covered with ice. The stars are his eyes that he ripped out thus creating the famous star constellation group called Matariki or Ngā mata ariki a Tāwhirimātea, commonly known around the world as The Pleiades.