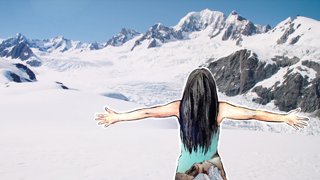 Video Transcript
Tēnā tātou.
I went on holiday and found out about one of my tīpuna …

This is Kā Roimata o Hinehukatere. It is a glacier – a slow moving river of ice.
People come from all over the world to see it.

It is very special to my iwi and we even have a story about how Kā Roimata o Hinehukatere got its name.

Long ago a woman called Hinehukatere lived in this area. She was an expert mountaineer.

In summer she climbed high up into the mountains and played in the snowfields.
In winter it is too dangerous to be in the mountains. So Hinehukatere spent her time in the lowlands.

One winter she met a man called Wawe and they fell in love.

When summer came, Hinehukatere took Wawe into the mountains with her.

But he was unsure on the snow and ice.

He slipped and fell to his death.

The atua felt sorry for her.
They froze her tears as they cascaded down the mountains.

This is a Kāi Tahu kōrero from Poutini ki te Toka.