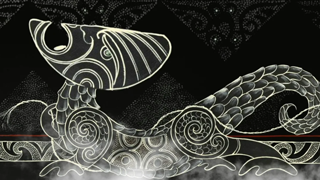 Video Transcript
Long ago, there was a race of supernatural giants called Te Kāhui Tipua. They lived on a magical island, Te Patunui-o-Āio.

One day, Te Kāhui Tipua walked across the oceans to Aotearoa.

When they got here they fought so much that they almost wiped each other out. So their leader, Kōmakahua, banished the worst three to Te Waipounamu.

The first was Kōpūwai. He was a huge dog-demon who was sent to Ōtākou deep in the South. Kōpūwai lived with his two-headed pet dogs by the Mataau River. He loved nothing more than catching people and eating them!

Pouākai was a giant, bird-like, tipua with claws as sharp as knives. Kōmakahua banished her to the top of Mount Tāwera in Waitaha. Pouākai would kill people by dropping them from way up high.

And Ngārarahuarau? He was a ‘bad as’ tipua who had a human face and great big scales on his massive, lizardy body. Kōmakahua banished him too.

Ngārarahuarau lived alone in a cave in Wainui Bay, at Mohua. Everyday he waited for people to walk past to catch and eat them! Humans were just so delicious!

This went on until Rūru recognised one of the victims.

Rūru was furious. “I’m going to make Ngārarahuarau pay for this!” she thought. “But how?”

At long last she had a plan … Rūru would trick Ngārarahuarau into loving her!

She cooked all his meals, she talked with him and treated him with kindness.

Ngārarahuarau and Rūru were together every day and every night.

“Marry me,” he begged, and of course Rūru agreed.

“Come and meet my whānau,” she said. “I will go ahead first, so they can prepare for your arrival.”

Ngārarahuarau couldn’t wait to meet them!

When he arrived at Whakatū there was a pōwhiri followed by a huge feast in his honour. Afterwards, Rūru took Ngārarahuarau into the magnificent whare, which the whānau had built just for them.

Ngārarahuarau lay down and Rūru began to sing. With a full puku and a warm fire it didn’t take long for Ngārarahuarau to fall into an enchanted sleep. Soon he was snoring and Rūru sneaked outside to her whānau waiting in the dark.

Suddenly, Ngārarahuarau woke and saw that his whole body was on fire! He howled and he groaned. He tried to escape, but all the exits were blocked. So Ngārarahuarau leapt up through the burning ceiling and into the black night.

Still on fire and in terrible pain his eyes searched for Rūru. He saw her throwing more wood against the burning whare. Was Rūru trying to kill him too?

Ngārarahuarau ran high up onto Pikikirunga. Burnt scales fell from his body and turned to stone. He dug deep into the mountain and left a gaping hole on top of Pikikirunga. Stalactites and stalagmites sprang up in the tunnels and the caves behind him.

Ngārarahuarau was exhausted. The tipua of Wainui Bay, who had devoured so many victims, finally died, deep in the belly of Pikikirunga.

Life drained out of him. His blood flowed from the falls at Wainui to his cave by the sea, mingling with the waters of the bay.

When you visit Wainui, you might be lucky enough to find a tiny red pebble amongst the grains of golden sand – a petrified drop of Ngārarahuarau’s blood.

And, if you find yourself at the top of Pikikirunga, the unusual stones, that lead you to an enormous chasm, are the burnt scales that fell from Ngārarahuarau’s body.

These are the things that remind us all that, long ago, Te Kāhui Tipua walked across the oceans to Aotearoa.